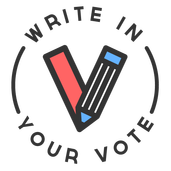 To become President, a candidate must win 270 of the 538 Electoral Votes up for grabs on Election Day. As you recall from the one day you didn't skip your U.S. Government class, the Electoral College was created by the Founding Fathers as a way to protect us from, well, ourselves. Sort of a "safety net", if you will.

​Remember, the Founding Fathers knew their clientele... and they knew us well. I mean, would you want to empower the same people that justified dressing up like Indians and chucking tea into the Boston Harbor? I don't think so. Without a doubt, the Founding Fathers didn't want Congress to pick the President - that would be too "Parliamentary", and a direct-election by the people could result in a duck becoming Commander-in-Chief. As such, the compromise was the Electoral College, which sees groups of Electors from each state cast their ballots a month after the general election for whichever candidate wins their state. (In some cases, these Electors can vote how they please, regardless of the general consensus.)

Hey, we have what we have. It is what it is. But let's make it work for us!

Currently, 41 states plus Washington D.C. allow "Write-In Ballots" for Presidential Elections. That means a total of 484 Electoral Votes are in play for write-in candidates...

Each state's "Electoral Vote" total comes from combining its two Senators with its House of Representatives members. For example, Ohio is worth 18 "Electoral Votes" (2 + 16 = 18). The 23rd Amendment gave Washington, D.C. (which is not a state) the same number of Electoral Votes as the smallest Electoral states (which currently sits at 3). NOTE: Nine states prohibit write-in candidates. These states are shaded red in the map above and include: Arkansas, Hawaii, Louisiana, Mississippi, Nevada, New Mexico, Oklahoma, South Carolina, and South Dakota. This equates to 54 Electoral Votes that are automatically denied to write-in candidates.

In what states are you "official"?

The "teachable moment" became an official grassroots movement on June 28th, when Ben Hartnell submitted his "Declaration of Intent" and all necessary paperwork to the Ohio Secretary of State (along with a slate of 18 Electors). Two days later, he received confirmation from the Ohio General Counsel that both he and his Vice President (Dave Marshall) are legitimate and OFFICIAL write-in Presidential candidates for ALL of Ohio! In fact, we were the FIRST official write-in candidates for the state of Ohio for this election.
After securing the state of Ohio, we then spent the rest of the summer and early fall filling out the necessary paperwork, selecting the needed Electoral College representatives, tracking down notaries, and getting everything submitted so your write-in vote COUNTS in November!

On Election Day, Ben Hartnell and Dave Marshall will be official write-in candidates in the following 26 states: 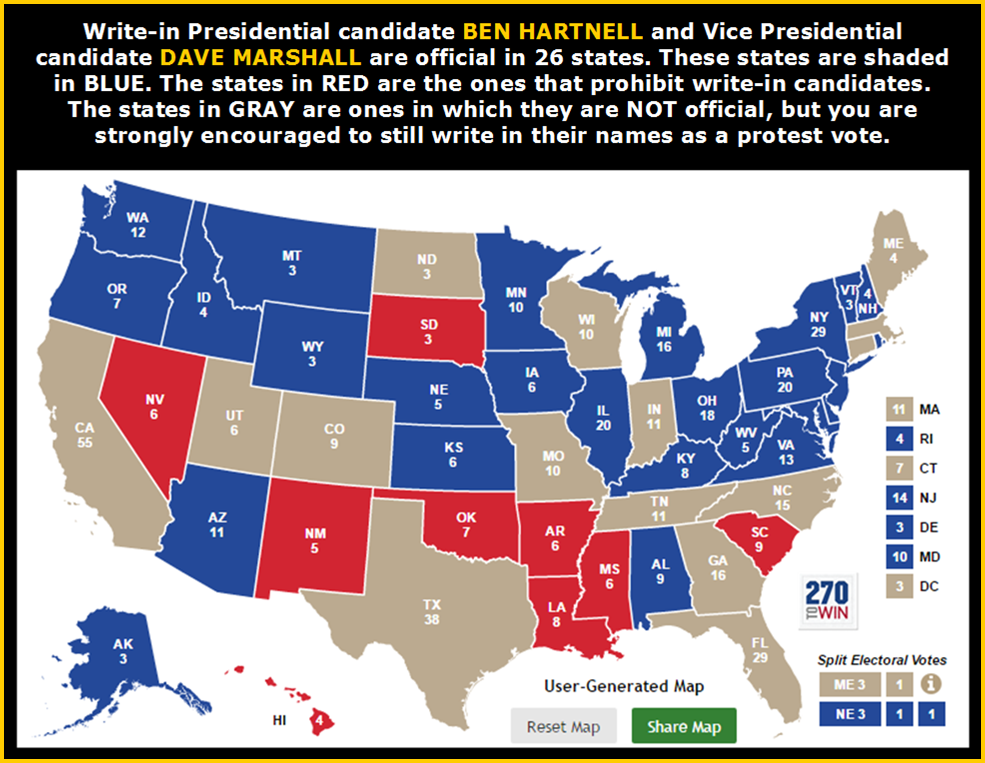 Running a write-in campaign has been a major learning experience for everyone involved. If we have learned anything from this process, it's that ballot access is not as easy as one would think. ​In many cases, it's either (a) prohibited (see the nine states listed above) or (b) it's unnecessarily difficult. ​Every state has its own set of rules for becoming a candidate - and every state has its own deadlines. (Unfortunately, we did not look into other states until we had secured Ohio. This cost us the states of Florida and Indiana, which had deadlines that had expired before our campaign really got up and running.)

Without being back by a major party (or one of the larger third parties), we simply lacked the manpower and resources (finances and time) to become official in some of the larger states like California and Texas. In others, the process was simply unrealistic. For instance, in order to be a write-in candidate in the state of Utah, I would have had to hand-deliver my paperwork to the Secretary of State's office. (Needless to say, that was a hard sell to my wife - and, as such, did not happen.) In Illinois, we needed to submit notarized paperwork to all 102 jurisdictions (counties) and eight Board of Elections. At $20 for each notary (including shipping costs), it was financially impossible for a school teacher to pull this off. As such, we picked two counties (Cook and Sangamon) because of the cities of Chicago and Springfield and became official write-in candidates there.

​Rest assured, however, that we looked into each-and-every state, which meant scrolling through the websites for Secretary of States and Boards of Elections (which often contained conflicting information for write-ins). This resulted in us e-mailing or calling the offices of several Secretary of States - who, in some cases, contradicted what their websites stated. Broken links, incomplete uploads, and a general "meh" attitude greeted us in several states (we won't mention which ones... yet). Other states were incredibly helpful and even updated their sites because of our inquires.

HOWEVER... this doesn't mean you still can't vote for Ben Hartnell and Dave Marshall in the states in which we aren't official. We are encouraging all of our supporters to STILL write in our names in these unofficial states. We have garnered enough of a national following that we hope these votes (while they won't count toward the outcome of the election) will still be tallied. This will also serve as a "protest" vote by denying Clinton and Trump the support. If you think about it, the national media always reports on the number of people who voted for "Mickey Mouse" - and yet, that cartoon rat has never been officially registered as a write-in candidate!

How do you vote for a write-in candidate?

​On Election Day, simply use the write-in feature on your ballot (unless you live in one of the nine states that hate democracy). Whether you have to write our names in by hand or type them in, be sure to follow these simple instructions: 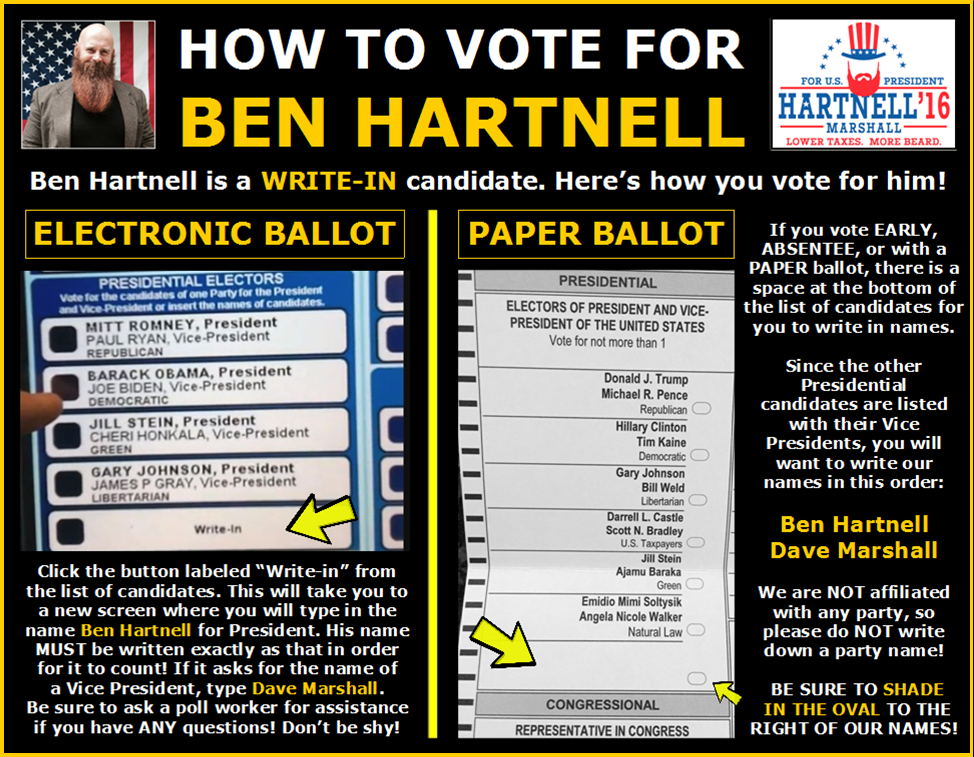 Isn't this "throwing away" your vote?

In early August, Stephen Weese wrote an amazing article titled, "How Not to Waste Your Vote: A Mathematical Analysis". Throughout his analysis, Weese illustrated how millions of votes are wasted on the winning candidate. Yes, you read this correctly. As such, our definition of a "wasted" vote is truly in the eye of the beholder. Additionally, he pointed out how much potential voting power a third party (and, by default, we'll include write-in) candidate can have on a process that has become a slave to the two-party system.

"The Founders never envisioned an endless cycle of United States citizens voting for the 'lesser of two evils,' as the argument is often presented. The idea was for free and open elections where the people’s voice would be heard. It was simple: the candidate who best represented your interests earned your vote.

Your vote is, therefore, an expression of yourself and your beliefs. Your vote has power as a statement. People voting out of fear of the worst candidate is a self-perpetuating cycle. If no one ever has the courage to vote outside of the two main parties, it will never be broken. However, if enough people vote and it shows in the total election count, it will give cause for us to reconsider and embolden even more to vote outside of the two parties.

​Yes, our current electoral system has some serious mathematical flaws. It simply does not encourage people to vote for their conscience – but we have seen that things are not as bad as we would be led to believe by some. The true value of a vote is in the people.

The value of your vote is what you give it. Should you spend it on a candidate you don’t believe in? Should it be an exercise in fear? It’s up to you. A vote is a statement, a vote is personal, a vote is an expression of your citizenship in this country. If enough people vote their conscience and vote for what they believe in, things can change.

If you are already a staunch supporter of a major party, then you should vote that way. This paper is not against the major parties at all – but rather against the concept that votes somehow 'belong' to only Democrats or Republicans. Votes belong to the voter. There has never been a more important time to vote your conscience."

Wow. Incredible. Weese nailed it not only from a mathematical standpoint but also from a philosophical one.
​
"If enough people vote their conscience and vote for what they believe in, things can change."

Can you win without getting 270 Electoral Votes?

Since our campaign's beginning, we've heard it all. While it would have been easy to just pack up shop and call it a year, we've pressed on. We honestly believe we have something special in the works.

WE CAN​ ACTUALLY WIN.

1. In order to become President, Clinton or Trump need to hit the magic number of 270 Electoral Votes.

2. With enough third party and other write-in candidates across this country currently nibbling away at support for Clinton and Trump, we realistically can get this election thrown to the House of Representatives (per the rules established by the 12th Amendment) if we keep them from winning enough states to hit 270. Consider it a "team effort" by us "little" people.

​3. You see, when an election is thrown to the House of Representatives, the House votes state-by-state until someone gets 26 states. The House, however, doesn't pick from the two major party candidates. It picks from the top THREE candidates with the most Electoral Votes. This means the Presidential race becomes one among the top THREE and not just the top two! Essentially, Clinton and Trump don't have to be our "only" choices.

4. Our other choice can honestly be Ben Hartnell. He doesn't need to win all of the states. He just needs to win one. So whether a candidate is official in 50 states... or in 23 states... it doesn't matter when the election goes to the House. Theoretically, a person can become President without winning both the Popular Vote AND the Electoral Vote. All one has to do is win the House. And guess what... it's happened before! In 1824, John Quincy Adams defeated Andrew Jackson despite losing both the Popular Vote (41.4% to 30.9%) AND the Electoral Vote (99-84). Since neither he nor Jackson hit the magic number of 131 Electoral Votes (out of 261 at that time), the top three candidates went before the House: Andrew Jackson, John Quincy Adams, and William Crawford. The House voted state-by-state, and Adams carried 13 states, Jackson came away with 7, and Crawford took 4. Since there were only 24 states back then, the first one to pick up 13 "won". This made Adams the new President. 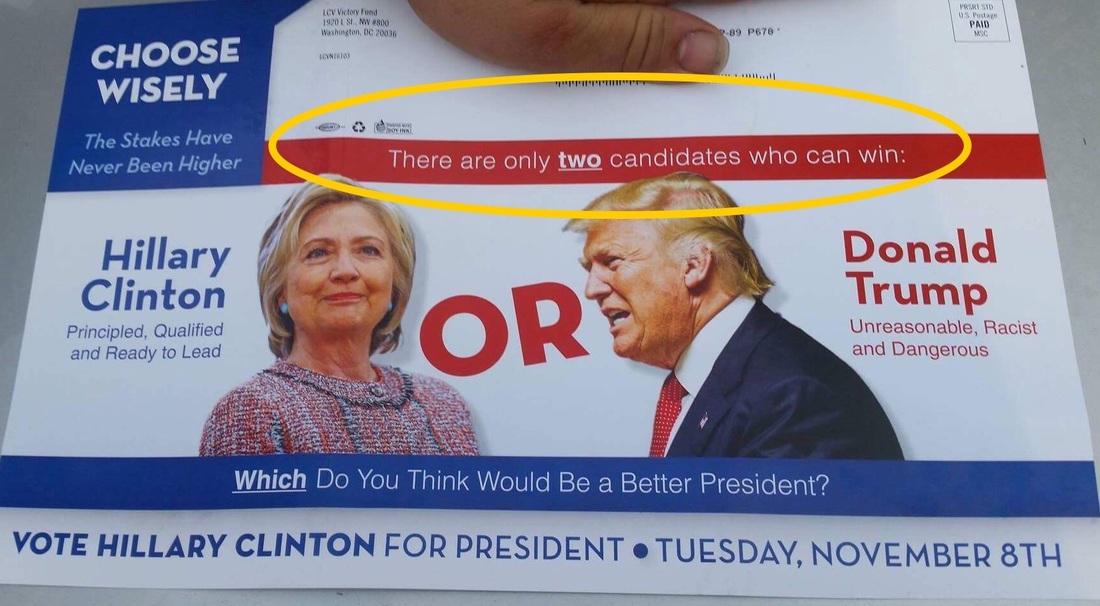 This mailer, sent out a week before the election - coupled with remarks by Bernie Sanders that people should not use a "protest vote" this election - clearly shows the impact that third party/write-in candidates have had on the psyche of the big parties! [Click picture for a larger version.]

Use the power of the pen, America!