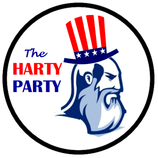 An Open Letter to Our Supporters, Our Detractors, and ALL Americans:

"Daddy! Are we going to the White House?!"

A year ago, such a comment from Fraser would have been completely out of left field.

Not this year, though.

How do you break the news to your campaign's biggest supporter that you've fallen short by just a few million votes?

Fraser made a mad dash into our room this morning with the same kind of excitement you'd expect on Christmas Morning. With his eyes beaming, I had to let him down ever so gently. Truth be told, I had been laying the groundwork for this speech - perhaps my most important campaign speech - for some time now. I reminded him that we did our absolute best. We gave it our all. We exhausted every resource available to us.

The "little campaign that could" simply ran out of "could".

Understandably, there were tears from him... and me. And why not?! It has been such an incredible journey.

From t-shirts to Popular Votes.

Fraser and I visited Liberty Union Middle School in Baltimore, Ohio as our final campaign stop yesterday. During the mini-assembly, Fraser fielded the final question.

"Do you think your Dad can win?"

Every father dreams of being the "superhero" in the eyes of their children. I still look at my father with admiration and a child-like wonderment. Yes, he's slowed down a bit these days - but he's still my superhero, you know?
In that final question, and with Fraser's confident answer, part of me wanted to join him and slip into the fantasy of the "What if...?" or even, "Why not?"

When Ohio was called on Election Night, the fantasy abruptly came to an end.

Had I failed Fraser?

Had I failed my supporters?

What good came of my campaign?

That's when, after reading the wonderful and beautiful comments posted on social media from all of you, it really sank in.

This campaign - because of the support and attention it gained from each and every one of YOU (including our pundits) - suddenly took on new life and gained incredible momentum - momentum that I could never have generated on my own.

YOU took control of this car. YOU kept it going. Here is what YOU accomplished, America:

1. Mickey Mouse and dead gorillas aside, we provided legitimacy and a new understanding of what it means to write in a SERIOUS candidate for office.

2. We educated thousands of students, adults, and ourselves about the requirements to run for the Presidency! We generated discussion about "No 270" and how a third party/write-in could win by getting the election thrown to the House. Our ideas, posts, and videos were shared by thousands - which kept getting the word out. Seeing our posts on other candidates' sites and Facebook pages was reassuring that we were on to something big here.

3. We gave people hope and refuge during an election season that had many of us abandoning faith in the electoral process. We allowed people to leave the polls with their heads held high.

4. We have started tearing down the archaic structures that deny people the opportunity to truly let their voices be heard. Mary Beth Richardson was upset that her state of South Carolina prohibits write-ins for federal elections (as do eight other states) because she wanted to vote for us. Through her amazing efforts and in her communication with her state senators and representative (none of which knew exactly why South Carolina prohibited write-ins), the judiciary committee is going to begin the process of repealing this 50-year-old law in January. Absolutely incredible! No longer will voices be silenced! Can you believe this? A classroom campaign and a single supporter will overturn a state law. Think about that.

5. Jodie Bailey shared the amazing article about the mathematical analysis that examined what's a "throw away" vote. This article gave such legitimacy to what we were trying to do by getting people to BELIEVE in their vote - that it became our campaign's Declaration of Independence.

6. Todd Weber, Lindsey Possehl, Amanda L. Vogt, Marisa Felan, Mike Fronckel and so many others showed the power of social media by helping us become official in Kentucky, Arizona, New York, Virginia, Pennsylvania, and Michigan. Without Facebook, we could never have picked up these states. So many of you volunteered your names and addresses - in some cases your signatures - or helped us track down other people. Even greater is the fact that many of you officially served as Electoral College representatives! (Put that in your holiday card, right?!) If ever there was a campaign community effort, this was it!

7. My sister Sarah Hartnell, her wife Micki Hartnell, and Cathleen Lutz were instrumental in helping get the word out to TV and radio stations. We had an absolute blast with each opportunity - and we're going to get on "Ellen" some day!!! (NBC's Reneé LaSalle and ABC's Mike McCarthy - you were SO crucial in getting our story out across the nation!)

8. My Advisory and students at North helped modernize me - and get me away from that flip phone! Sure, I'm a decade behind the whole Facebook and Twitter "fads" - but better late than never! (Thank you Judy Crawford and Nancy McFarland for posting things on your Facebook pages while I worked on getting the training wheels off my own account!)

9. My Cousin and Vice President Dave Marshall. Oh, America - you need Dave. Not just any ol' Dave. Cousin Dave. You see, "Cousin Dave" doesn't just refer to the flesh and blood "Dave". Rather, "Cousin Dave" is term of affection, of endearment, of wonderment, and certainly one of respect. When someone - or something - is your "Cousin Dave", it means it's your center. It's the one person - or the one thing - that makes you "good again". Just like spending 10 minutes with my Cousin Dave can fix everything, spending time with your "Cousin Dave" does the same. You leave refreshed, reinvigorated, and ready to tackle the world. (Literally. Dave played football and will teach you how to wrap up life's legs and sack it for a loss.) Thank you Dave for being a part of this amazing trip.

10. Reconnecting with classmates, friends, and former students, meeting new people, and forming new friendships - all because of the campaign and the power you gave it. Seeing people in our campaign shirts and putting our signs in their yards... and then watching as people changed their profile pictures and backgrounds on their social media accounts to images from our campaign... it was so real. I was frequently speechless at the level of support people gave to our campaign. This doesn't mean that we didn't have our share of negative comments or posts made about what we were trying to do. If nothing else, the fact that our campaign struck a nerve with the naysayers showed me we were "legit" and had the potential to shake things up. But the key thing was it sparked DIALOGUE! Genuine dialogue! This is exactly what we wanted to strike up! The more people talked about a write-in candidate... the more the idea became embedded in the public's mind. When one of the first eight votes cast at midnight to begin Election Day in Dixville Notch, New Hampshire was a write-in vote for Mitt Romney, I realized that write-in campaigns were going to be taken seriously. (And the fact that my students pointed out that such a vote for Mitt wouldn't count because he wasn't registered as a write-in candidate was an even better sign!)

11. The fact that so many teachers and professors at EVERY level (elementary, middle school, high school school, and college) found a way to use or discuss our campaign made this thing such a powerful tool to show students why their vote matters - and, more importantly, why THEY could become President one day. It's this wide-eyed wonderment that greeted me everywhere I went when meeting students and in discussing the campaign that showed me just how important our message had become. (A huge thank you to Lisa Dapoz and the staff of McVay Elementary for using the campaign and fueling Fraser's excitement for the Presidency! You made my son feel like the most important child on the planet - and I'm forever grateful.)

12. My wife Molly Geyen Hartnell - there's not much I can say that hasn't already been said to you over the years. You are my rock - and you are a saint for smiling, rolling your eyes, and saying, "Chase it" when I present my life's next big adventure.

In the end, we did not win the Election of 2016. However, what we gained is an understanding and a belief in ourselves and the power that our voices truly have. And no matter what anyone says, gaining that kind of self-realization can never be taken away.

Our campaign was a major success.

Our campaign gave us all hope.

Our campaign showed my son - and hopefully other ADULTS - that campaign's don't need to be negative to be effective.

Our campaign paved a trail for future candidates to follow.

Our campaign started planting the seeds for next time.